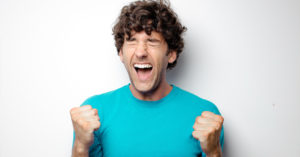 In my last article ‘Is Money Magic a Sham?’ I talked about miracles with money only happening to the lucky ones, of which I’d decided I wasn’t one. Not true! I’m not saying money magic happens all day, every day but it does show up more regularly for me now. And all just by asking for it and being willing to receive it. I have to preface it wasn’t an overnight or a quick fix. I created magic with money as fast as I was willing to change my beliefs ad choices about it.

One of my favourite examples of these magic tools was helping me get out of £55,000 debt. I had accumulated this debt over the years with little or no income to live day-to-day, let alone pay it off.

Ten credit cards and three loans were outstanding. How was I going to pay it all off? I thought to myself, ‘Maybe I can use one of those questions that guy Dain was talking about on his telecall. Probably won’t work for me but what the hell – I’ve got nothing to lose. What else is possible here? How does it get any better than this?’

Nothing showed up instantly. There was no magic call from someone else willing to gift me money or other possibilities. See – I told you this magic stuff was nonsense.

Except for a few days later, a company called me asking me about mis-sold payment protection insurance. They asked if I would like to investigate the possibility of getting compensation for it. I’d heard a lot about it but, because these things only work for everyone else and not me, I’d previously decided not to bother. However, there was something about this conversation that sent a thrill through my body and it made me ask, ‘I wonder if I could get back even £100?’

So I filled out all the forms. It took me ages, but I did it, and I sent them off and waited patiently.

First, three letters in response were ‘no you can’t have anything’. But I persevered and asked, ‘What else is possible? How can it get any better than this?’

A couple of weeks more and the letters seemed to come in a flurry. ‘Yes you are entitled to compensation’. Boy was I surprised when I saw that it was a £1000! Not just the £100 I thought was possible. Added to that the company found two loans that I’d forgotten I’d even had. In total, I received about £25,000 back.

I said to myself ‘There’s something about these Access Consciousness tools that seem to work! Maybe I should use them more often!’

I used them a bit more, and I found that this kind of magic can show up not just with money, but with my body, my business, my happiness, my relationships and pretty much everywhere! That said, it NEVER shows up the way I think it will. With the past expenditure it didn’t just disappear I was given money to help me pay it off.

That’s what I’ve found about this money magic stuff. You’ve, got to have no point of view about how it shows up.

If I hadn’t listened to the person and filled out the claims forms for the mis-sold insurance, I wouldn’t have received the £25,000+.

Money magic yeah, it’s as real as you choose to allow it to be. What else is possible? How does it get any better than this?

I wonder what it would be like if you also played with these questions with your money?