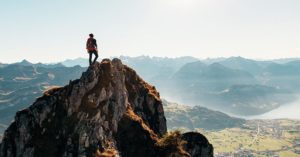 The Earth is a living, breathing organism and much of the time, we think we are a blight on its landscape. Creatures of consumption wreaking havoc everywhere we go on this beautiful globe. However, what if that is not entirely true? We could actually a contribution to the Earth, we could be Wizards of the Earth.

So most people believe the Earth is like a piece of concrete that it is inanimate, that it doesn’t really grow, and it doesn’t change all that much. Although that is not the case, the Earth is a living organism the same as us. Our bodies are an extension of the Earth, and they have the same energetic fields that run through Earth. We’re so connected and we don’t realise it. Often people think, ‘I’m just me, and I’m just the body’. But what if we can contribute to the whole planet, just by being different energy?

So Paul, how can somebody do that who has maybe never heard of Access Consciousness?

Going out into nature is a great place to start connecting with the Earth even that means sitting next to a house plant and just breathing. You don’t have to do anything, it really isn’t a doing; it’s just something we be if we allow it.

My next suggestion is to start asking questions. For example, in December 2020, I did five days of energetic contribution to the Earth Class, and it was incredible. One of the things that became clear with working with the Earth is its willingness to receive. We asked questions like:

-What energetic contribution can I be to the Earth?

-What contribution can I allow myself to receive from the earth?

The earth is such a generous being. Its willingness to gift and receive is incredible!

Well, you have to wait until there is a blue moon on a high tide on the seventh of day seventh of the seventh year, and then you can do it. No, I’m just kidding.

It is straightforward and practical, which is truly the magic of the tools of Access Consciousness. It is about asking a question and knowing what you know. Because the more we acknowledge that we know everything and what’s required at any given moment. And asking the question opens the space for you to be the contribution the planet is asking for.

To find out more about how you can be an Earth Wizard listen to the YouTube video below: